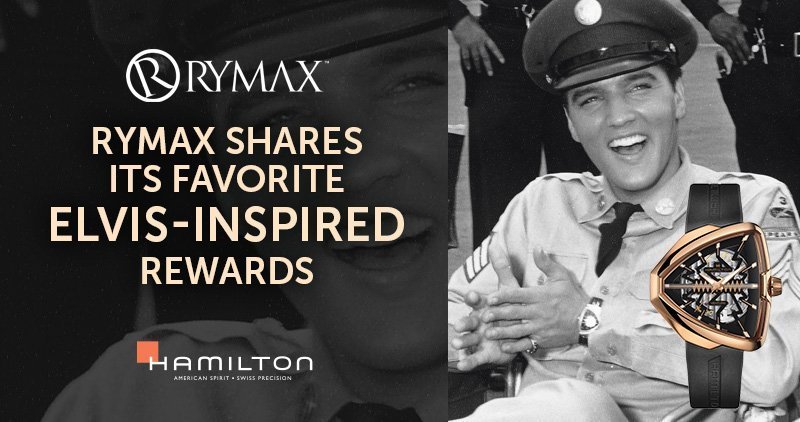 The new Elvis Presley Biopic starring Tom Hanks and Austin Butler hits theaters this weekend. So, Elvis fans everywhere are putting on their Blue Suede shoes and getting ready to take a stroll down memory lane. We love nostalgia, so we too thought we would take a journey through history with help from our long-time brand partner, Hamilton.

Part of the Swatch Group family of watches, Hamilton watches are innovative, iconic and known for American Spirit and Swiss Precision. The brand creates automatic, mechanical and quartz watches, for both men and women. With a reputation for craftsmanship and strong movie, military and aviation heritage, Hamilton watches include the Khaki Field, Khaki Aviation, Khaki Navy, Jazzmaster and Ventura.

Originally introduced in 1957 as the world’s first electric watch, the Ventura was made popular by its unusual triangular shape and its appearance in the hit movie, Blue Hawaii, starring…you guessed it…Elvis Presley. The King of Rock and Roll wore the Ventura in the movie but loved it so much, he decided to wear the stylish timepiece both on-and off-screen.

Now an iconic part of the brand’s collection, Ventura has been recreated over the years with a fresh new look, but always remaining true to the shape that made it famous.

In honor of the biopic’s upcoming premiere, and Elvis’ favorite watch, here are a few of our favorite versions of the Hamilton Ventura watch, all available through Rymax. If you have Elvis fans in your rewards programs, you surely won’t want to leave these out of your reward offering:

VENTURA ELVIS80 AUTO
Automatic | 42.5mm x 44.6mm | H24585331
Creating an automatic version of a watch famed for its battery powered movement is a bold move, and one that’s typical of Hamilton. It’s also a fitting tribute to the ultimate rulebreaker and Ventura’s biggest fan: Elvis Presley. The H-10 movement that features in this model has a power reserve of 80 hours in a nod to what would have been Elvis’s 80th birthday.

VENTURA ELVIS80 SKELETON AUTO
Automatic | 42.5mm x 44.6mm | H24525331
Dare to be bold with the Ventura Elvis80 Skeleton, an ultra-modern tribute to the past, present and future of the world’s first electric watch. A powerful evolution of a revolutionary timepiece, its precise skeletonized dial features a striking zigzag at the center to match its luminous rose gold PVD-coated, triangular case. This bolt of energy celebrates an iconic symbol of innovation and draws the eye to the automatic H-10-S movement underneath.

VENTURA QUARTZ – FLEX
Quartz | 32.3mm x 50.3mm | H24301131
The King of Rock ‘n’ Roll was known for the incredible flexibility that was the key to his signature dance moves. He embodied the American spirit and himself owned an original Ventura Flex. This is the inspiration behind the Ventura Flex, which revives the flexible bracelet for the ultimate twenty-first century tribute to Mid-Century Modern design.

VENTURA QUARTZ
Quartz | 32.3mm x 50.3mm | H24411732
With its daring and distinctive design, the original 1957 Ventura quickly became an icon and a collector’s item. Ventura’s latest incarnation is a faithful tribute to the original piece and mirrors the pioneering shield shaped celebration of Mid-Century Modern design.

So in the words of the King himself… “a little less conversation and a little more action please!” Call us today to add the Hamilton Ventura to your rewards program.